After that meeting at Olive Garden on March 18th, I talked to Jack’s birth mother every single day. She would tell me about how he was really active at night. She would say, “I bet he has a lot of hair, because I have horrible heartburn!” She would update me on all of her doctor appointments. (And I would immediately Google everything she told me.)

What she gave me in those daily text messages was the second biggest gift she gave me. She knew that I would personally never experience those things. I will never know what it’s like to feel my little guy wiggling and kicking in my belly late at night. I will never sit in a doctor’s office and talk about due dates and inducing. So she gave me as much of that experience as she could.

So when people ask me if I was scared that she might change her mind, the answer? Not really. I mean sure, a tiny piece in the back of my mind would every once in a while whisper “what if,” but I trusted her, and I trusted in the Lord.

But if you’re keeping track, we had less than one month to prepare for our little dude. If we had the entire 9 months to prepare and sit with those emotions, I almost assuredly would have been more scared. But I simply didn’t have time to worry!

On April 7th, I went to pick up my packet for the Rock the Parkway Half Marathon that I was running the next morning. I had to show my drivers license, and the volunteer said, “Did you know your ID is expired?” Say what?!

Y’all. I am the most Type A, hyper organized person, but this baby thing had apparently rocked my world. And to make matters worse, the ONE THING they drill into you while putting together your hospital plan is that you have to show your ID. (Kinda frowned upon to let a rando take home a baby.)

So here I was, on a Friday evening, baby due any day, no valid ID. Cool.

A quick Google search told me that the JOCO DMV did have Saturday hours, but they closed at 12:00. (Enter new motivation to run that race as fast as possible.)

I ran that morning, enjoying the beauty of our city, thinking about how the next race I run, my son would be waiting at the finish. It’s a moment I pictured in my head during so many races, and I had to choke back tears that entire run.

Crossed the finish line, jumped in my car, drove straight to the DMV, shockingly had no wait, took the most disgusting picture, got the license, and went home to wait. 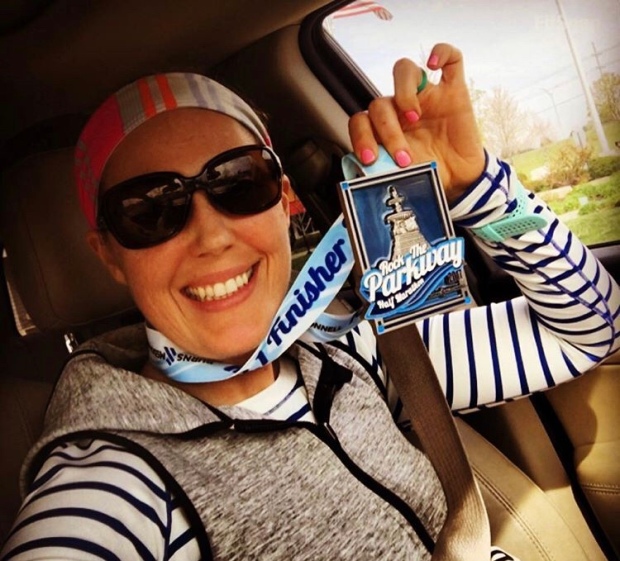 On the morning of April 15th, at around 5:00 AM, I was running on our treadmill when my phone rang. Jack’s biological mother’s name on the screen. She said she was in labor and headed to the hospital. I ran upstairs, woke up Chad, took quick showers, and jumped in the car.

It is a five hour drive to Dodge City, where Jack was born, so this was one of the longest car rides of my life. My phone was going crazy, I was trying not to cry, I ate a ridiculous amount of candy.

We made it the whole way to Dodge City without our baby showing his face. But as we got closer to the hospital, she let me know that they were sending her home. Her status hadn’t changed, and she stopped having contractions, so they decided this wasn’t the day to deliver a baby.

So what do we do? Turn around and drive home? Wait it out? What if he doesn’t come for another week? We can’t live here for a week! We decided to grab some lunch and talk it over (also consulting with our adoption case worker). We ate some of the best Mexican food of my life and decided to spend the night and drive home the next morning. (Unless we had a baby.)

The next morning, Easter Sunday, we made the drive home. THAT was the longest drive of my life. I was just so sad and disappointed. I’d pictured us driving home with our baby boy, but instead we drove most of the way in silence.

We got home, did some laundry to restock the hospital bag, and got ready for the week ahead.

The next morning, 5:00 AM, same treadmill, phone rings, shower, haphazardly repack the bags, get in the car, head back to Dodge City. But this time, after only one hour of driving, I got a text message. A single picture of our baby boy. And all I could squeak out was “It’s Jack!” 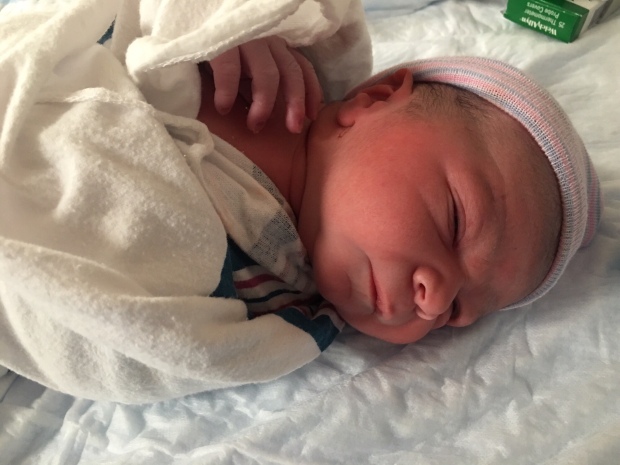 I made Chad pull over so he could see the sweetest little face that I had ever seen. And then I told him to hurry!

When we got to the hospital, a nurse greeted us with a massive smile and a hug. She showed us to our room and said, “I’ll go get your son.” IS THIS ACTUALLY HAPPENING?!?!

There are moments in your life that you wish you could relive over and over. That you could bottle or box to revisit any time you want to feel that way again. When that cart came through the door and the nurse handed me our baby. Yea, I want that moment to play on a loop for as long as I live. Those precious moments where Chad, and Jack, and I cuddled on the tiny hospital room sofa. The feeling of my baby against my chest. Yea, gimme all that. 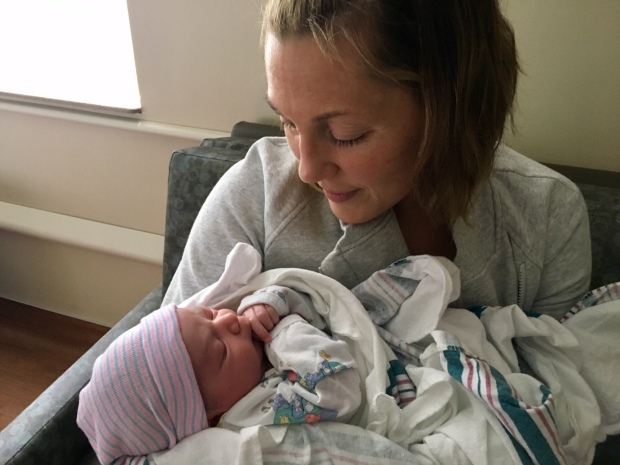 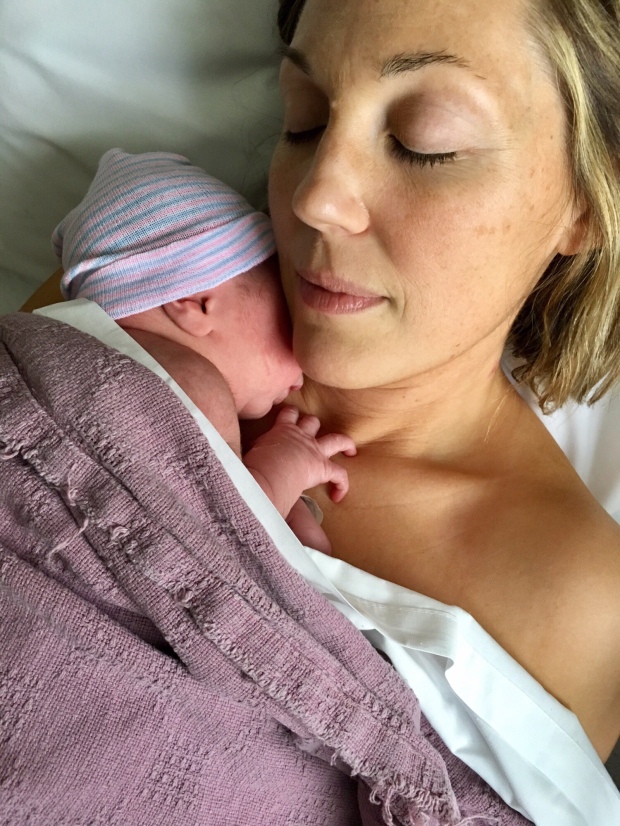 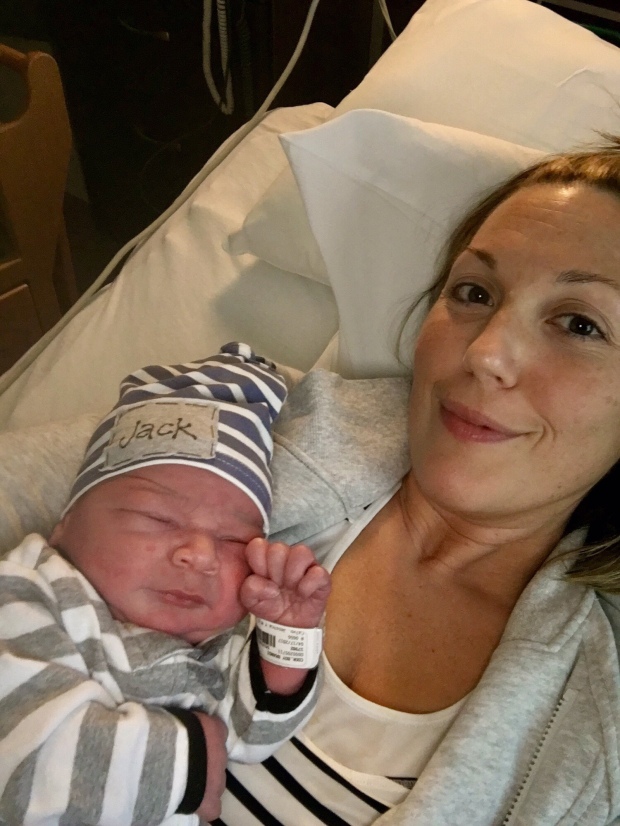 In the state of Kansas, a birth mother can sign her paperwork after 12 hours, so Jack’s birth mother was required to stay in the hospital for that time. She had elected not to see Jack, but she was open to seeing me. I left Chad alone with his new best friend, and went next door to talk to Jack’s birth mother.

I talked to her twice that day—once very shortly after we arrived at the hospital, and once to say goodbye. That was the last time I ever talked to her. You may notice that I don’t say her name or share her background, and I won’t. Her story is her story to tell, not mine. The thoughts and feelings that went into her decisions were hers and hers to share. Our close friends and family know the story, because they were there for all of it, but I don’t feel right sharing her story in a public place. But I will say two things:

1. I miss her. I talked to this person every day for a month, and she gave me the greatest gift I will ever receive. So yea, I unconditionally love her and miss her.

2. We talk about her every day. We pray for her (and Jack’s biological father), by name every night. Jack is still too little, but he will always know about them, their names, and his story.

After we said goodbye, I went back to our room and our new life began. We ate Chinese food, got zero sleep, had no idea what we were doing, and we were stupid in love. 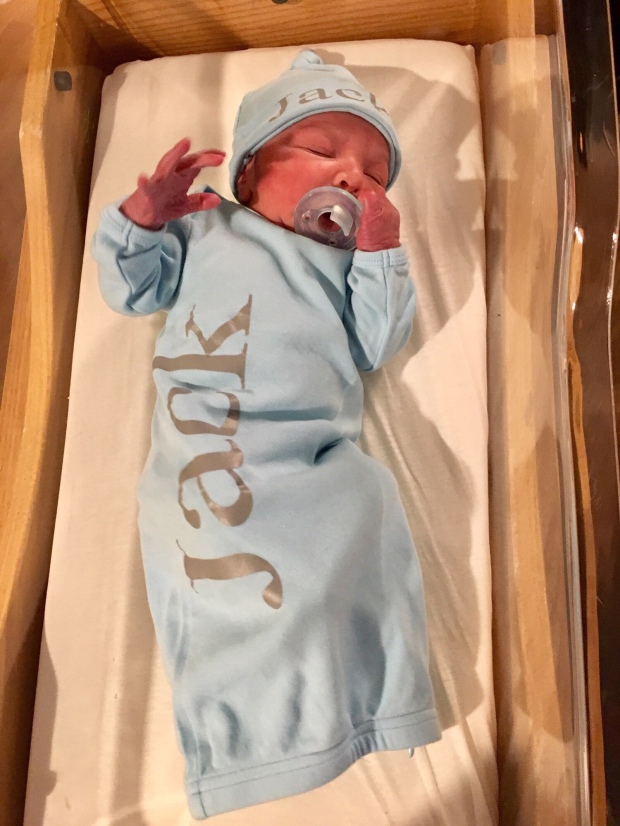 We packed up the car the next morning with OUR BABY and drove home. Those first few days are such a dreamlike blur of smiles, and tears, and no sleep, and more love than we’ve ever known, felt, or received. And if you have children, you know those days well.

And that’s where I leave this part of our story. On any given day, I don’t even think about the fact that Jack is adopted. He’s just our son. He has my sense of humor, he weirdly looks like Chad, he mimics everything we do. He’s just ours.

Over the years, he will have questions. We will face challenges. This story will grow, expand, and become more nuanced. But it’s a story that I am so glad is ours.

Sela is not your typical business theme. Vibrant, bold, and clean, with lots of space for large images, it’s a perfect canvas to tell your company’s story.
Sela is responsive, which means it adapts to any screen, providing your visitors with a great browsing experience on any device.